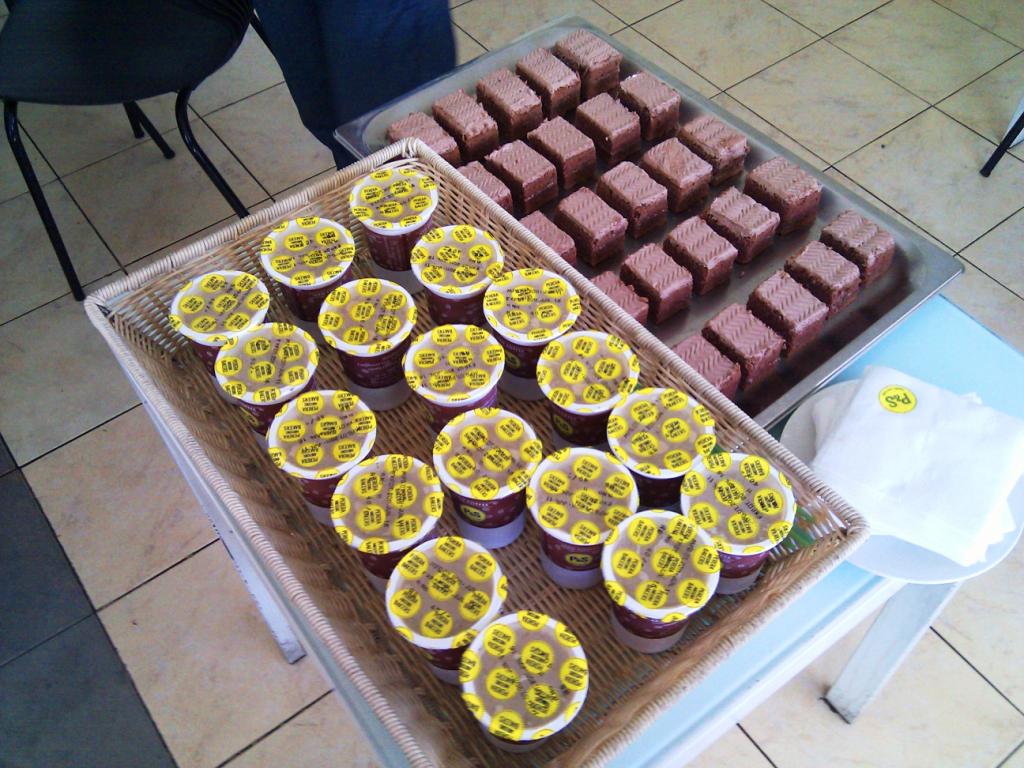 I’m sure you remember that my previous blog post was about one of Sri Lanka’s oldest brands, Perera and Sons’ entrance to Social Media and promised to follow their social media activities. Well, today I’m going to write about their #PnStreat.

It all started like this… After Perera & Sons joined Twitter, the very first person to follow them was Uditha Umesh. And after Perera & Sons, being in the giving mood they were… Decided to reward their 1st Twitter follower – a treat where the *Tweep can treat about 20 of his friends on Twitter. So then it was Uditha’s turn to pick some Tweeps to for his party – and luckily he put down yours truly into the list. So we were all going to meet up at the Rajagiriya Perera and Sons outlet between 12.30 – 1.00 this afternoon.

Walking towards the PnS outlet in Rajagiriya I met Udara. Well, I had to call him a few minutes befor that, to find out where exactly the venue was. When we walked in and made our way upstairs, there were about 10 Tweeps at the venue.  Uditha was grinning from ear to ear. I saw a couple of good buddies, some very familiar faces and some not so familiar. Later realized I did know them all (from Twitter). The group were chatting, tweeting, taking photos and logging into FourSquare and checking in at the venue while waiting for the PnS staff to deliver the goodies. 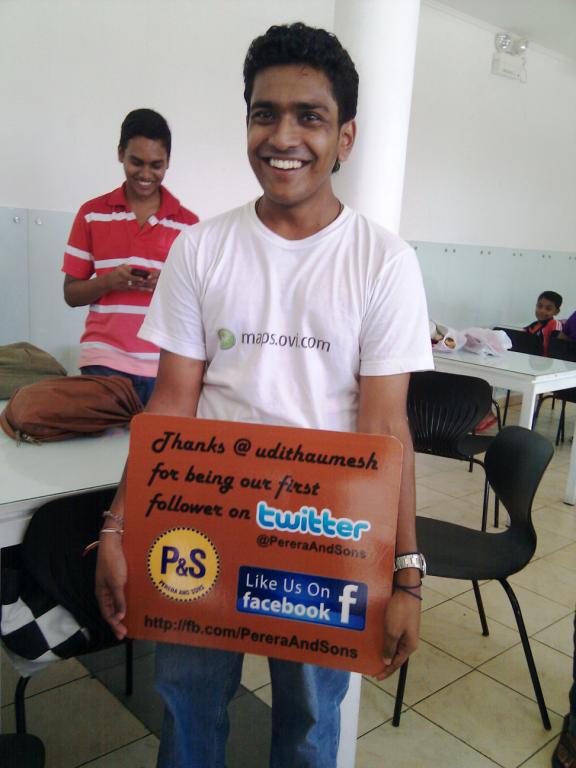 A lady with a nice smile came with a camera and a memorabilia placard and wanted to take our photos. Goodies came in at intervals and we were all chatting away including talks of a possible TweetupSL this year (the second such event) and some inquiries about the Refresh Colombo meet-up. Finally the last item on the menu was brought in, so we started digging in. There were chinese rolls, pastries, tuna sandwiches (nomnom) and chocolate cakes. And to wash it all down, we had the famous Perera and Sons iced coffee. 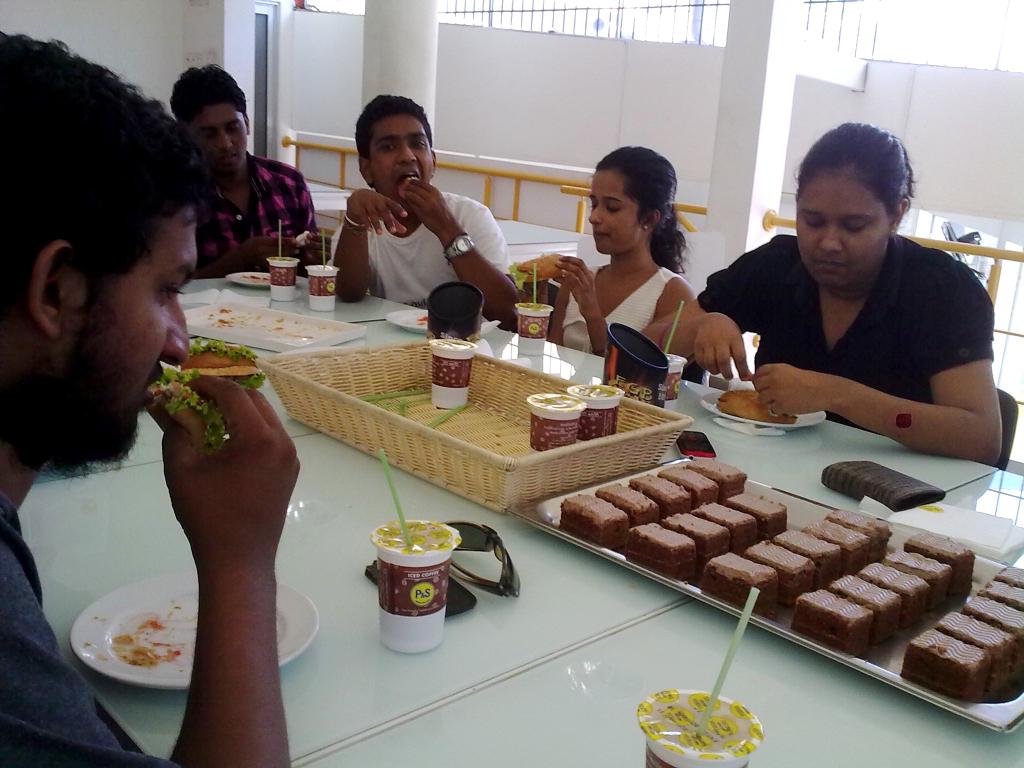 So after all was said and done, teasing folks, paparazzi efforts, comparing phones, playing Angry Birds, checking out updates on twitter and facebook and the responses, some social media talk and updates on what everyone’s doing…. we finally decided to leave PnS somewhere past 2.00pm. Just before we left, we realized that there were a number of uneaten pieces of cake, left on the tray. Although we asked the boys to finish them, they didn’t want to (were they shy??). And @yoshrox suggested that we could just pack them into a box and give it to some street children. So we did that. Then she also volunteered to give them off to some of the kids in the Nugegoda area. And with that, we all bid good bye and went on our way home (Thanks Yoshitha for the ride!).

So that’s the story of today’s very interesting social media promotion, which was carried out by Perera and Sons. You might also wonder how have they fared in popularity since the last time I wrote about them? Well they passed 10,000 “Like”s on their Facebook page last night and at the time of writing this, they have 11,154 Likes and counting. And on their Twitter account, they currently have 424 Followers – which I think are pretty good achievements for a brand that’s been on social media barely over 2 weeks.

What they seem to have done to achieve this is, of course Facebook ads. In addition, they are doing a daily Cake give-away called #PnSCake promotion – combining both Facebook and Twitter. 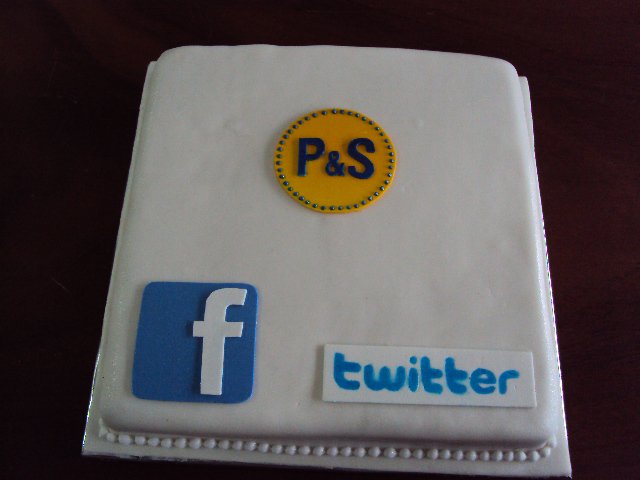 Today is the 7th day of the cake promotion and the winners so far are :

Tomorrow it could be you! Or me! 😉

To try your luck at winning this cake, you can check out the Perera and Sons Facebook Page and take part in the day’s competition. All you gotta do is be on Facebook and Twitter. They actually encourage the Facebook users who are not on Twitter, to open up a Twitter account. If that’s a good thing or a bad thing I don’t know. My personal opinion is, It’s awesome! We need more Tweeps.

What will they do next?

Of course I was curious to find out what’s next on their social media agenda. So I had a little Twitter-DM chat with the PnS folks and here’s what I found out – Next move, FourSquare.

Perera and Sons by now have claimed 19 of their outlets on FourSquare. With these, they will be embarking on a 4Sq campaign with special deals ranging from 10%-25% discounts, free items when making certain purchases and more to come! They said this would be very soon and they will announce when the specials are active.

Want to know which PnS outlets you need to check into, to get all the discounts and freebies? Here’s the list :

So WHY are they doing this?

I was told that this is the brainchild of their MD, Gihan Perera who is fully into seeing technology playing a part of customer interaction. Well, apart from social media, I’m sure most of us who have been their customers must have noticed the “change” in PnS from a rusty old pastry shop, to a nice little cafe. I have a feeling this may be due to the fact that the business may have been revamped by Perera’s son. Just my opinion here.

Further, they said that their main objective with these social media campaigns was to reward their loyal customers and to keep them satisfied. They also want to improve their services by listening to ideas, suggestions and complains from their customers. What better way to do this, than to have active social media presence? Especially on Twitter. Well, let’s hope they actually do listen, keep listening and make the necessary changes if there are any by engaging with their customers. This would be a definite win-win situation.

What some businesses don’t realize when they fear social media presence is that they will have to face the music of customer complains. But what they should realize here is that this is exactly why businesses need to be on social media. Customers feel validated when their favorite brands listen to them, empathize and better themselves. They earn loyal customers for life and even faithful brand ambassadors if they do their ‘social media’ right. Let’s hope Perera and Sons stick around to prove this to other brands that are I’m sure watching.

So who’s going to fight for the new mayorships then? And where at? I’m going to stalk the Pitakotte PnS outlet and nobody dare come that way alright? 😀

10 thoughts on “How Perera and Sons Treat the Tweeps”