It was just yesterday that I noticed Perera & Sons had started following me on Twitter!

I didn’t even know that Perera and Sons were on Twitter before, so I started following them (@pereraandsons) back. Curiosity got the better of me so I asked them a question. An hour or so later, they managed to get me into their conversation. It wasn’t just me, quite a few Tweeps were tweeting about how not only Perera but his sons were also following them! lol

During the conversation with “Perera and his sons” that went on till late into the night, they promptly announced that they will be getting on FourSquare and will be doing some interesting promotions, starting with 15 pre-decided outlets. 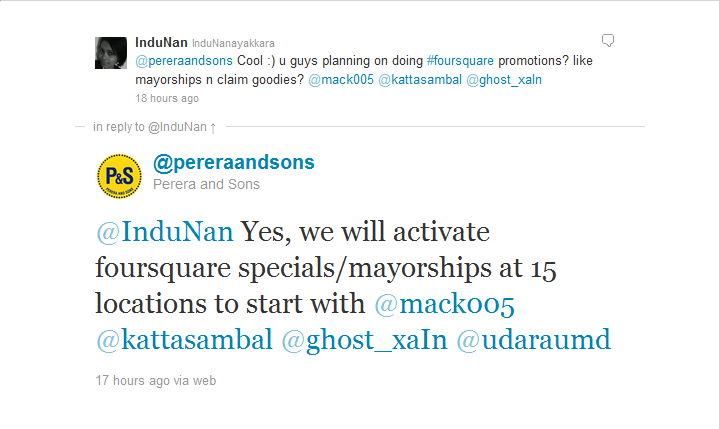 Lucky for me, who pass by the Thalawathugoda and the Kotte outlets of the franchise almost daily – it seems that those two outlets ARE on the initial list. 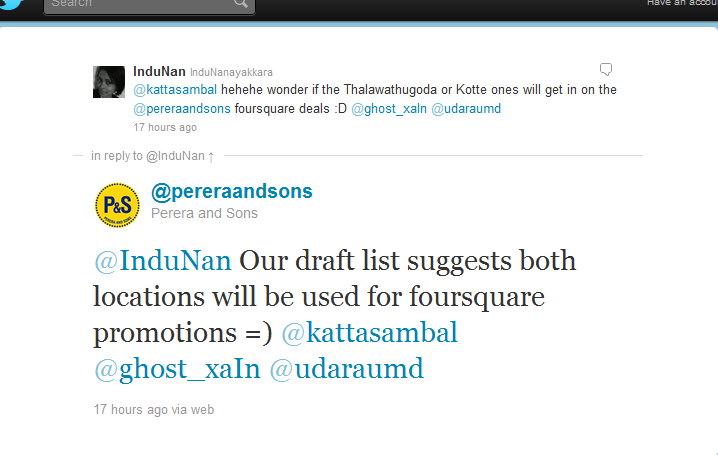 Right then, Udara inquired about the Bambalapitiya and Rajagiriya branches. The P&S folks quickly revealed that those two outlets were also in the list of the first 15, to go on FourSqurare. 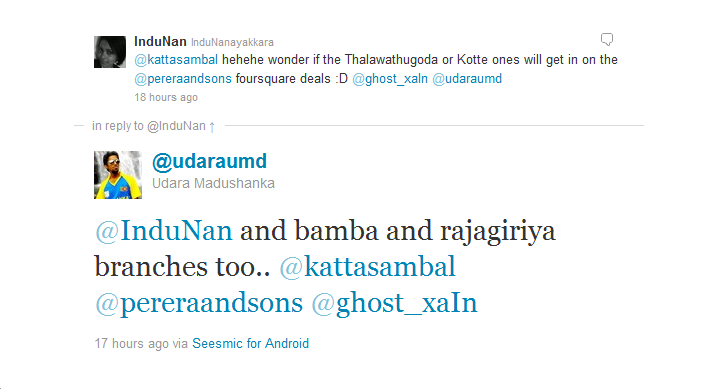 Perera and Sons on FourSquare

After a bit of searching, I managed to find 13 Perera and Sons outlets on FourSquare – 12 around Colombo and 1 out of Colombo. I’m sure these will be followed by additional outlets soon. Although we’ve seen some location based campaigns done by one or two local businesses on FourSquare before, it would surely be interesting to see how P&S would pull off this campaign with multiple outlets throughout Colombo.

Not only Twitter and FourSquare, as it appears, Perera and Sons had launched a brand new Facebook page (I’m guessing yesterday) which was increasingly gaining “Like”s from their fans all over Facebook.  When I first visited the page last evening, there were just over 100 Likes and right now there are 475 Likes! Yikes! That’s how fast they are growing in popularity on Facebook. And mind you, their first post’s timestamp is recorded as 8.48pm on Monday. 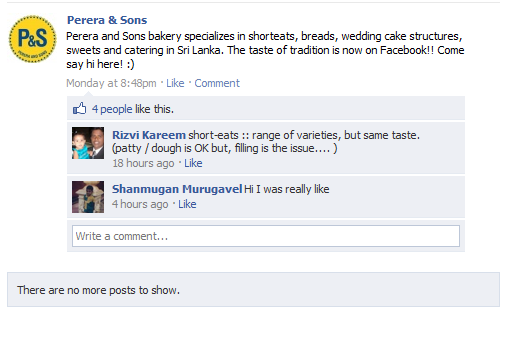 Perera and Sons’ social media marketing activities don’t stop there. They also have a YouTube channel. Although there aren’t any videos uploaded just yet (at the time of writing this post), this is a sure fire sign that says they are armed and ready to go! So I suggest you check back soon.

Social Media Campaigns of some other brands in Sri Lanka

Just earlier this month, we saw another brand that was highly active on Twitter and on Facebook alike – Kik Cola. They were doing a superb campaign to gain an audience for the brand Kik Cola as well as for the event that they organised in Colombo – the HedKandi party. They selected 10 people over Facebook and Twitter that were given VIP treatment at the party. They also had live updates throughout the event until the wee hours of the morning. And then, as fast as it started out, their hype just died down. The last I heard of them on Twitter or on Facebook was this :

Although they managed to gather over 1,000 followers on Twitter and over 14,000 Likes on Facebook, I personally think it’s a little sad that they just stopped engagement with the public over the two mediums as abruptly as they started. NOT a good move in my opinion. They should have at least continued posting regularly, although less often. And most importantly, continued engagement.

I could not have gone without highlighting one of the very first local brands that became active on social media – Twitter, FourSquare, Facebook and YouTube. That’s none other than Coco Veranda. Coco is not just a restaurant or a coffee shop anymore – especially if you ask the folks on Twitter. Coco is a friend. Managed by equally friendly and ever helpful Sarath, that’s how well Coco has run their social media marketing campaign on Twitter. Although Coco hasn’t organized any massive events, spending millions of rupees or a huge social media campaign to bowl Colombo over as such, Coco is very much engaged with her customers and friends alike with various little stunts that gives us pleasant surprises just when we think she has calmed down a bit! 😀 Without a doubt, I would say that Coco’s ongoing social media engagement is one of the best I’ve seen around.

Eye-opener for other Srilankan businesses

Coming back to our topic for the day – Perera and Sons stepping into social media is also a definite eye-opener for other local businesses. Especially for those who are based on a particular “location” such as businesses that have one or more retail outlets. I’m sure these businesses can learn much from the social media efforts of Coco Veranda and even Kik Cola and of course P&S; to learn how successfully and effectively social media campaigns can be run in Sri Lanka and how well the general public will embrace or respond to them.

Finally, I’m waiting to see what sort of campaigns Perera and Sons will pull out – especially over FourSquare. Let’s talk about that on another blog post. In the meantime, let me know what you think the Pereras’ might come up with – or what you hope they would… And what you think of their campaign so far. I’d be delighted to read your ideas on comments.